Waiting is a shared experience, and us humans love shared experiences. As an old saying goes: “Time wasted is friendship gained.” Also turns out, we love to reinforce each other’s thoughts on making the right buying decision by standing in a crowd.

This is a short article about a cheesecake but for those who are interested by line-waiting sociology I would recommend this article by Jamie Lauren Keiles published on racked.com

Montrealers are in love again. With a cheesecake.

And the phenomena created a new round-the-block-line literally every day!

I heard that only few desserts could compete with the bouncy, rich and creamy cakes that are known to melt in your mouth. Even though the infatuation seemed a bit too much.

So I gave in after my 4th attempt at standing in the ridiculous lineup and decided to suck it up and wait.

More than 60 people were waiting ahead of me at the newly opened Uncle Tetsu’s on a warm Sunday afternoon and no one cared. We were going to wait as long as it took to get one of the 7-inch cheesecakes that are so popular, they are currently limited to one per buyer and some people are waiting up to 90 minutes to get it.

And man was it worth it!! 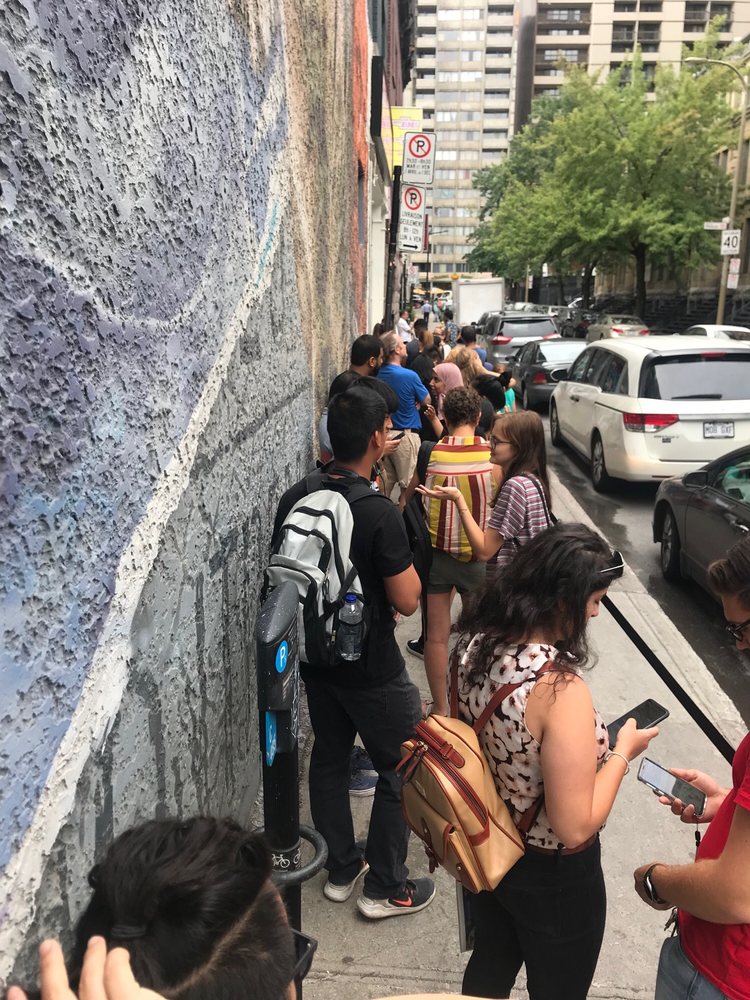 It’s light, fluffy, flavourful, hand-baked combination between a classic cheesecake and a soufflé and yes every bite melts in your mouth.

Newsflash! Since the famous Japanese-based cheesecake shop opened at corner of Pierce and Saint-Catherine Streets, not far from Guy, the block officially became a Dessert-Heaven-Tour, as Uncle Testu joined Quebec-based shop Juliette & Chocolat and Yeh! Frozen Yogurt and Café. 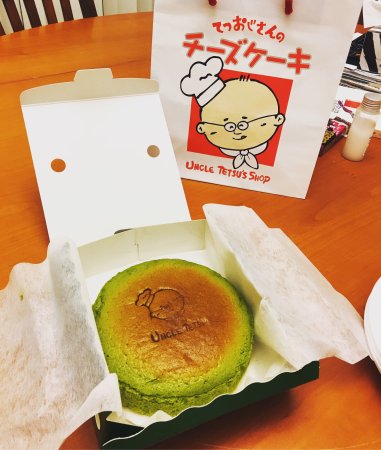 The outlets is a warm, red and white interior with a open-space kitchen that allow customers to see 10-11 employees frantically baking until a hot cast iron kisses the fluffy cheesecake to stamp the logo on it.

The menu is simple: cheesecake 12$, biscottis-1.50$, madeleine cakes-$2.50. Notice that that Toronto shops sells it for $10 tax inc. so Montreal is paying the smaller-city-last-in-the-line premium.

Uncle Tetsu’s Cheesecake originally began in 1990 in the Hakata area of Fukuoka, Japan.

The store was founded by Tetsushi Mizokami. Outside Japan, the brand has more than 70 shops across China, Hong Kong, Singapore, Thailand, Malaysia, Philippines, Cambodia, and now Canada. Uncle Tetsu entered the Chinese market in 2013, and the Japanese cheesecakes became so popular in Shanghai a copycat company set up 30 Uncle Tetsu locations in China in 2013. In a 2014 court settlement it was ordered to pay $160,000 USD.

The first Uncle Tetsu outside Asia opened in 2015, in Toronto, Canada