The Irishman Paradox: 3½ hours of Cinema on a Small Screen!

Most people will agree. The Irishman’s limited theatrical run will force most people to watch Scorsese’s epic pseudo-biopic gangster drama on their laptops and TV screens.

An acute buzz and an overall positive critical response is predicting a bloody triumph. A probable gripping cinematic tour-de-force of the year, representing late-career high points for Robert De Niro, Al Pacino and Joe Pesci, directed by one of the godfathers of modern cinema.

Netflix’s hope is to use The Irishman in order to drive more subscribers to sign up and to entice its current subscribers to stick amid the scary arrival of most dominant force in the entertainment industry: The Walt Disney Company.

Disney+, the upcoming subscription video-on-demand streaming service, is set to launch, in Canada and the United States on November 12, 2019, after the company ends its existing distribution agreement with Netflix.

In January 2019, it was reported that Disney will spend up to $500 million on future original content based on Marvel and Star Wars properties.

All that to say Netflix is getting ready to lose market share and probably lots of it.

For the last two years their response was a very aggressive content creation strategy. In 2019 only, Netflix is expected to spend $15 billion on a wide range of content, its own as well as signing deals with other studios to house movies and TV shows. When traditional studios passed on “The Irishman” the streaming service was more than happy to jump in and to bankroll its $159 million budget.

To be noted that the fear of Disney+ arrival is possibly already priced in Netflix’s shares (market value of $127 billion), which are down 11% in the last 12 months.

The Irishman’s limited theatrical release has been the subject of much controversy recently and the short explanation is this: Netflix failed to agree on a distribution deal with major cinema chains. The streaming service wanted the regular 90-day theatrical window cut to 45 at the very most.

As a result, the majority of cinemas are now boycotting the film and tickets for showings in New York are currently on StubHub for between $65 and $85 each.

The question remains though. Why did traditional studios passed on “The Irishman” a possible movie of the year? 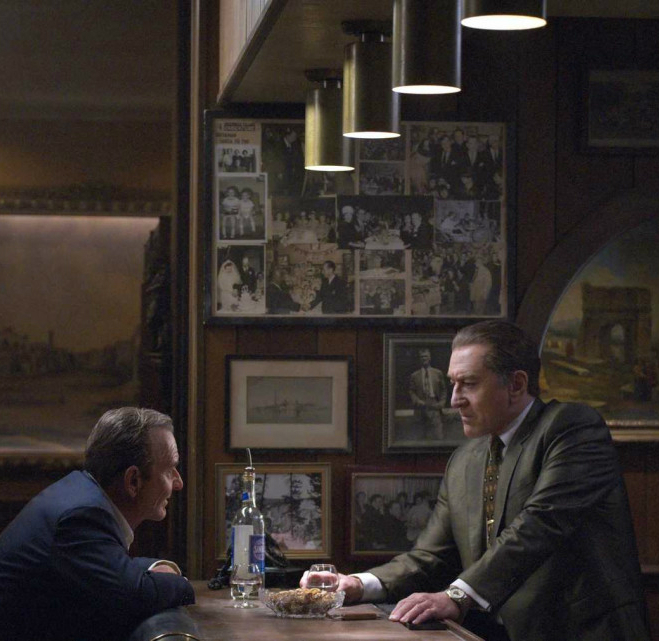 Earlier this week, Martin Scorsese wrote a piece in the New York Times called: I Said Marvel Movies Aren’t Cinema. Let Me Explain, where he explains the paradoxical situation he was in with his latest epic mob film.

“In the past 20 years, as we all know, the movie business has changed on all fronts. But the most ominous change has happened stealthily and under cover of night: the gradual but steady elimination of risk. Many films today are perfect products manufactured for immediate consumption. Many of them are well made by teams of talented individuals. All the same, they lack something essential to cinema: the unifying vision of an individual artist. Because, of course, the individual artist is the riskiest factor of all…The situation, sadly, is that we now have two separate fields: There’s worldwide audiovisual entertainment, and there’s cinema. They still overlap from time to time, but that’s becoming increasingly rare. And I fear that the financial dominance of one is being used to marginalize and even belittle the existence of the other.”

Scorsese fears that the financial dominance of “modern film franchises: market-researched, audience-tested, vetted, modified, revetted and remodified” has become “your primary choice if you want to see something on the big screen.” This tendency would marginalise the films of Paul Thomas Anderson, Joanna Hogg, Claire Denis, Ari Aster, Kathryn Bigelow or Wes Anderson. The great movie makers that Scorsese admires.

When it comes to theatrical attendance demographics, age-wise, 25-39-year-olds are the largest movie-going demographic. They made up nearly a quarter (23 %) of 2018 movie audiences. Young families seem to be fond of the Disney films which, in the first nine months of 2019, accounted for nearly 40% of the US box office and hold five of the top six spots on the list of highest-grossing films in 2019. The “Avengers: Endgame,” “The Lion King,” “Toy Story 4,” “Captain Marvel” and “Aladdin” — have all sold over $1 billion in tickets globally.

Are we entering an era where cinema as an art form is leaving the theatre and will be produced by streaming distributors who are willing to take more chances?

Is this a symbol of the times we are in, where most content is streamed in our homes versus the old times where movies were social events?

Personalisation, broadly known as customisation, is an integral part of the online world and common practice among marketing and UX specialists for almost a  decade. Its extension into the visual entertainment is no surprise.