He is a child of 1968 revolutions, and maybe the most progressive fashion designer that ever lived. He turned catwalks into show business and dressed Naomi Campbell, Cindy Crawford, Lady Gaga and Beyonce among others.

His designs were futuristic, sharp and insect-like. His clothes with solid colours, wasp-like waists, and flame-like cutouts, impacted fashion conversations and runaways all over the world. He launched two major fragrances that to this day sell for almost $300 million per year.

And then at the peak of his career, in 2003, he disappeared from the public eye, preparing for the most impressive alteration the fashion world has ever seen. A complete metamorphosis of his own body. 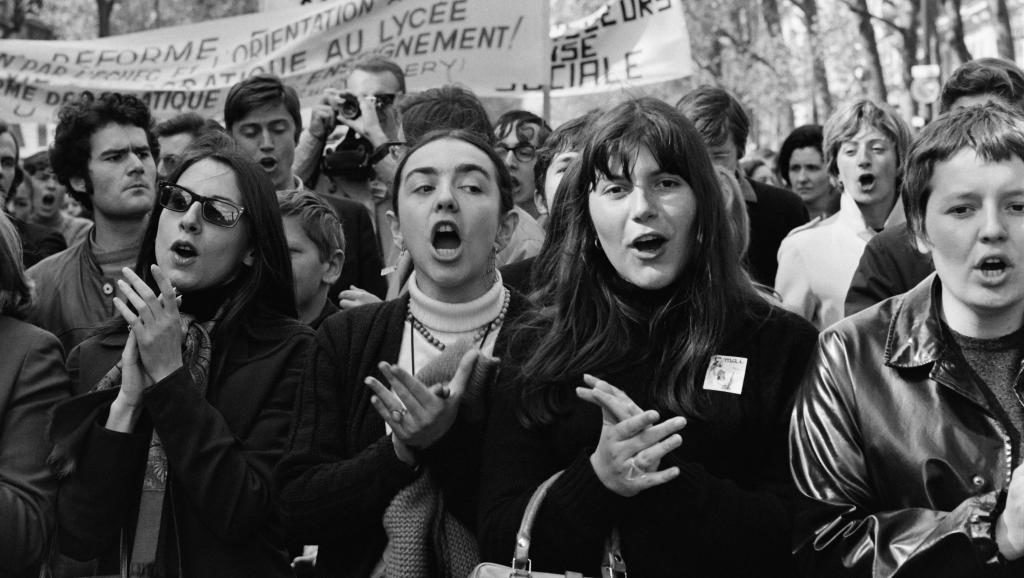 Thierry Mugler moved to Paris as a 20 years-old ballet dancer, in 1968, during the largest civil unrest in modern French history.

Shortly thereafter, violence evaporated, workers went back to their jobs, and when the elections were held on June 23rd 1968, the Gaullist party emerged stronger than before.

The exhilaration of the revolutionary spirit wasn’t coherent or sustained enough to support a lasting political and social change. However, May 1968 changed almost everything in both culture and arts. The protests spurred a series of long lasting intellectual and artistic movements, from music to street art and fashion.

In an interview with the New York Times, feminist historian and art critic Linda Nochlin spoke of women represented by Thierry Mugler as “women who appropriate their sexuality, in a way that is not exaggerated but grand. I find it extremely interesting politically because it completely undermines our concepts of femininity. It’s so extreme that these women are not sexual objects, but sexual subjects.” 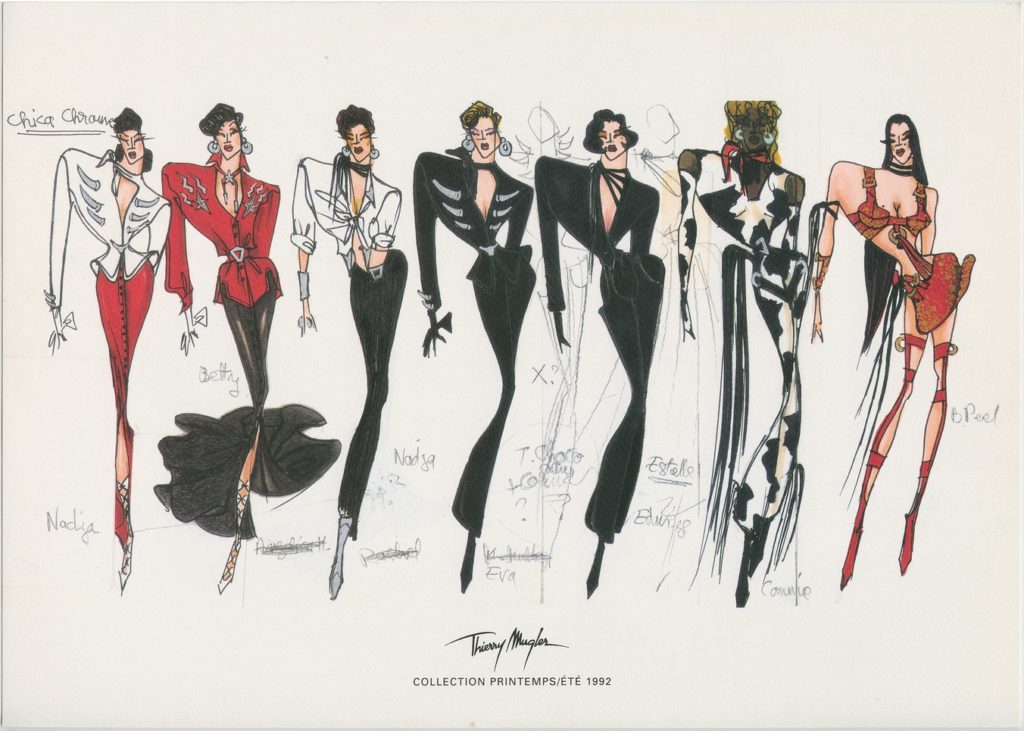 During the 1980s, Mugler became an internationally recognized designer, and his collections garnered much commercial success. At the request of the Chambre Syndicale de la Haute Couture, he completed his first haute couture collection in 1992 and releases his first perfume called ‘Angel’.

In 1990s he decided to turn catwalks into show business, sometimes spending over $3m on one launch and got to work with some of the world’s most beautiful people: Cindy Crawford, Claudia Schiffer, Linda Evangelista, Carla Bruni as well as world’s greatest stars: David Bowie, Janet Jackson and Beyonce. 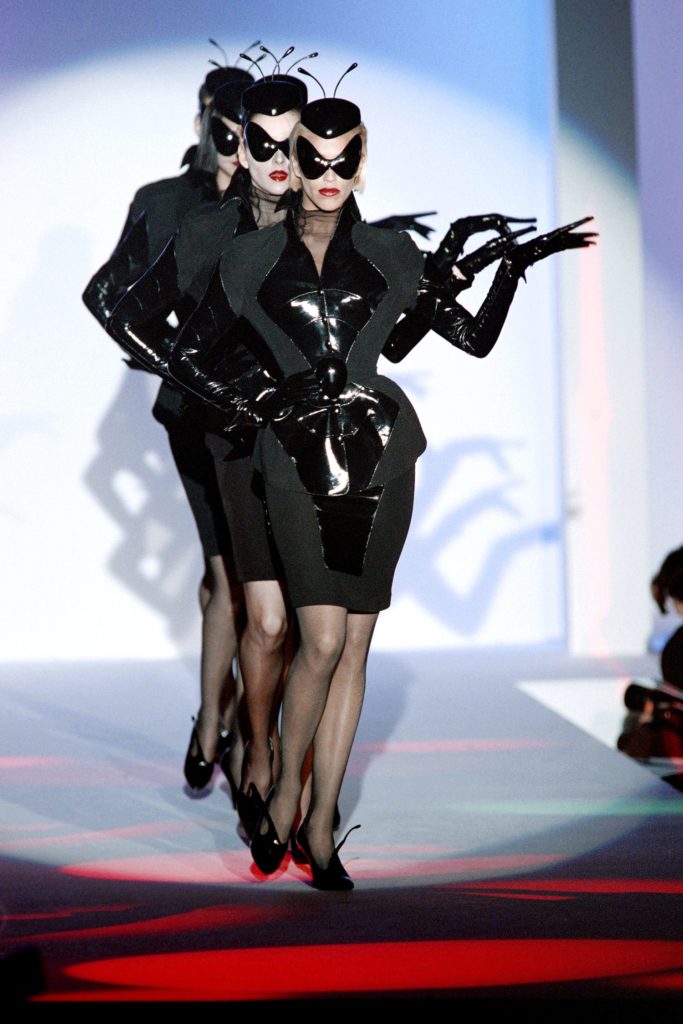 His influences were as eclectic as he was: transhumanism, cyberpunk literature, Soviet iconography, comic book superheroes and insects.

He made his models look immortal, flying down from the ceilings, like angels, dressed in bodysuits made out of vinyl and leather. He made them look longer, taller and more powerful than everyday people.

His designs were futuristic, sharp and insect-like. His clothes with solid colors, wasp-like waists, and flame-like cutouts, impacted fashion conversations and runaways all over the world.

And then at the peak of his career, in 2003, he disappeared from the public eye, preparing for the most impressive alteration the fashion world has ever seen. He spent over five years metamorphosing his body and face with plastic surgery and thousands of hours of assiduous bodybuilding training.

He came back with a new name: Manfred.

He was barely recognisable, a completely transformed person, what NYT called  “…a 240-pound spectacle of muscle and nipple and tattoo…”

Since then, Mugler launched Alien, the second major fragrance (today Angel and Alien together produce about $280 million in sales annually). He designed costumes of Beyoncé, as well as neo-burlesque extravaganzas Mugler Follies and Cirque du Soleil Zumanity. He created and directed The Wyld, an intergalactic Vegas-style show in Germany where he currently lives.

Famous for having elevated privacy to an art form, Thierry Mugler has been refusing museums retrospective for years, including offers from The Met and Le Musée des Arts Décoratifs, in Paris. Therefore it came as a surprise when he accepted to work with Nathalie Bondil, the general director of the Montreal Museum of Fine Arts, after she flew to Berlin, to meet him. 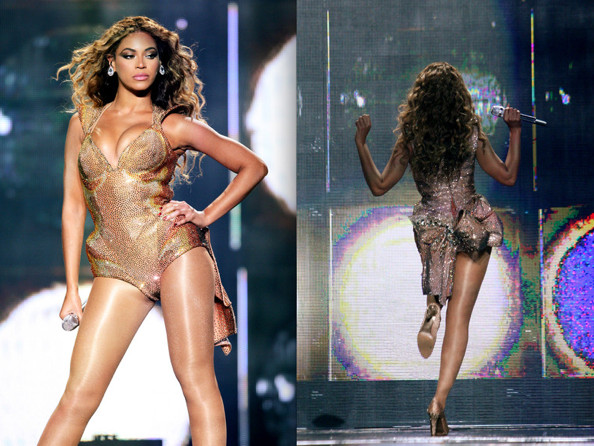 The idea was first suggested to Bondil by Thierry-Maxime Loriot who curated and organized the show under her direction.

“Thierry Mugler: Couturissime” is opening on March 2 and will include over 150 outfits designed between 1977 and 2014. 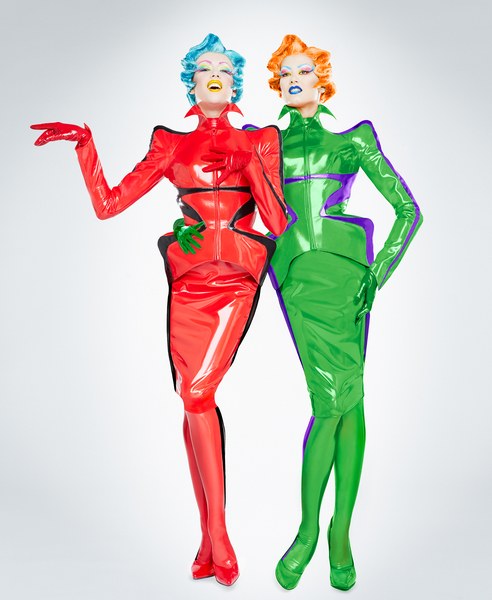 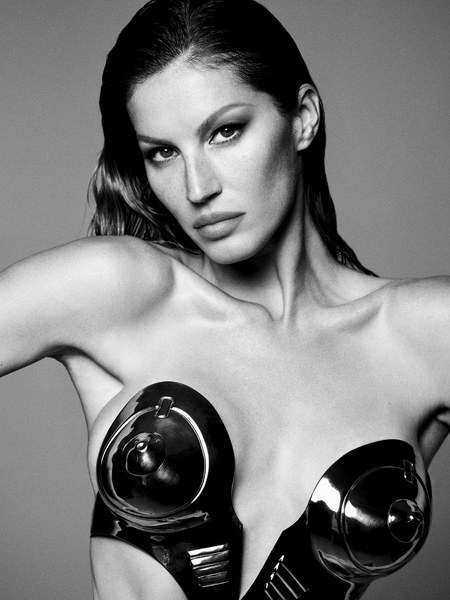