In fact, Montreal is on its way of becoming the Silicon Valley of Artificial Intelligence. You might be wondering how come.

First of all, Montreal has been a pioneer when it comes to AI innovation largely due to the efforts of Yoshua Bengio, head of MILA (most prestigious deep learning group in the world) and co-author of “Deep Learning”, a book that Elon Musk referred to as “the definitive textbook on deep learning.” DL uses statistical techniques to give computer systems the ability to progressively improve performance without being programmed. DL is now the main technology behind AI and it currently dominates the IT market.

But Montreal has become the 2nd global Artificial Intelligence hub in the world (after San Francisco) only after the governments of Canada and Quebec have implemented tailored tax credit programs and exemptions. The most impressive one is probably the E-Business Tax Credit (CDAE) that covers up 30% of employee salaries, to up to $25k per job per year.

In 2017, Google, Microsoft, Facebook and even RBC have announced investments of millions of dollars in AI labs across Montreal and Brad Smith, President of Microsoft, called Montreal the global hub for AI research and innovation.

Today AI is everywhere. From medical imaging, quantitative finance and image identification to translation services and virtual assistants. Its applications are used in almost every industry and are considered to be the next big technological shift. According to the online data site Statista, the global AI market is expected to hit an estimated $4 billion in 2018 and $10 billion by 2020.

But AI is facing one major problem: a lack of computational power. AI, especially deep learning techniques, requires a massive amounts of calculations to be made fairly quickly. This means it uses lots of processing and most hardware used today lacks the computational power to run AI applications proficiently. In fact. many great AI ideas are stuck in textbooks for decades because we don’t have the capacity to apply them.

Cloud computing and massively-parallel processing systems are offering the answer in the short term. But as data volumes continue to grow, and deep learning drives the automated creation of increasingly complex algorithms, the bottleneck will continue to slow progress.

Nebula-AI, Montreal’s latest newcomer, figured out how to solve this problem by combining Blockchain with AI and addressed the unbalanced demand between consumers and suppliers of AI devices. Large number of users who need the computing power for AI cannot obtain economical and efficient computing resources. Peer-to-peer payments as well as blockchain ledger technologies, enables AI computing to be paid and shared. 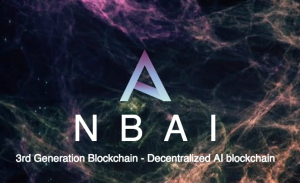 Blockchain is simply a new distributed format filing system for digital information. Because data is encrypted and distributed across many different computers, it enables the creation of highly robust databases which can be updated only by those with permission.

Nebula-AI is set to build a decentralized artificial intelligence computing blockchain that reduces the energy costs of traditional Proof of Work by converting GPU mining machines into AI computing services. It has also established an AI training center in Montreal in order to disseminate the latest applications and knowledge and deliver talents to the industry.

Nebula-AI is also indirectly competing with Google and Amazon based AI cloud services. However Nebula-AI offers decentralized intelligence in contrast with the giants that have the power to cut off at any time, given special circumstances or based on their own interests or government pressures. I.G., China.