The Beautiful Lie — The Life And Death Of Anthony Bourdain

I’m not going anywhere. I hope.
It’s been an adventure. We took some casualties over the years.
Things got broken. Things got lost.
But I wouldn’t have missed it for the world.
Anthony Bourdain

The thief compliments the things he steals, if not the owner of them.
But the suicide insults everything on earth by not stealing it.
He defiles every flower by refusing to live for its sake . . .
The man’s crime is different from other crimes – for it makes even crimes impossible.
G. K. Chesterton

In the hours following his very public death by suicide, CNN’s lachrymose anchor, John Berman, said, “Everyone wanted to be Anthony Bourdain.”

My first — admittedly sympathy-challenged — thought was why would we admire, revere, want to emulate someone who ends up hanging himself at the end of a rope? Since Mr. Berman was speaking on behalf of millions of admirers, all of whom, presumptively, would rather be alive than dead, we are forced to conclude that they hadn’t figured out that Tony Bourdain’s life was the beautiful lie that both he and the celebrity makers confectioned out of the disparate elements of his well documented life, a lie that, thanks to a complicit media, continues to thrive in the imagination of his vast society of worshippers and mourners, a lie, that 18 months since his passing, has not been submitted to a post-mortem.

I suppose we shouldn’t be surprised since it is in our DNA that at the behest of our inner groupie we seek out what is exceptional in others as a way of dealing with the banality of our own lives. And whether or not the person is real or a fantasy construed for our distraction and/or entertainment is immaterial. There is an existential void to be filled, and like antibodies on virus alert, our imagination springs into action. What matters is that we come to care about the larger-than-life person as if s/he is someone we know. “Seen from a distance,” writes Albert Camus, “these existences seem to possess a coherence and unity which they cannot have in reality, but which seems evident to the spectator. He sees only the salient points of these lives without taking into account the details of corrosion.” 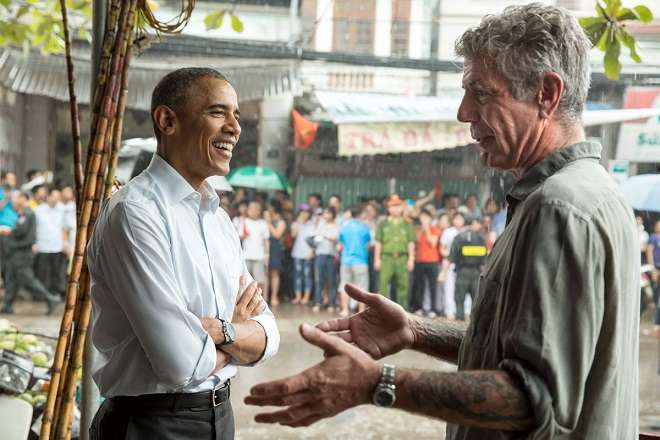 Tall, ruggedly handsome, unselfconsciously virile, smart and observant, he had it all and we all wanted it. He spoke directly from the heart to the heart of the matter; he was refreshingly unmannered, unedited. He once said “I’m not afraid to look like an idiot.” If, as Arthur Koestler observes in The Act of Creation, “a snob is someone who when reading Dostoyevsky is moved not by what he reads but by himself reading Dostoyevsky,” Bourdain was moved not his confession but by himself confessing while making direct I-contact with the camera.

His considerable appeal combined an unusual admixture of diffidence and nonchalance. He could be simultaneously cool and empathetic. He demonstrated that it was possible to be detached while wearing your heart on your sleeve. He had no qualms entering his misdeeds, regrets and all that is “foul and fair” into the public domain in language that borrowed equally from the X-rated and Barak Obama. As his popularity and ratings soared, Bourdain would have been keenly aware that audiences were hugely attracted to his confessional style, that his charisma was directly related to a willingness to enter his flaws and foibles into the public domain, and that his person — the star he had become — and not the exotic location was the take-away destination in Parts Unknown.

Not unlike hard-living journalist Hunter S. Thompson whom he greatly admired and who, incidentally, died by his own hand, he was trademarked as irreverent, a badge of honour that would over time alienate Bourdain from his essential self as he began to measure himself through the eyes and expectation of his growing fan base. Bourdain’s apparent facility and ease in every conceivable environment — from aristocratic France to the mosquito blighted jungles of Borneo – became the means to the end of swelling the ranks of his followers.

Over time, the attention and adoration became a drug he was unable to refuse, and he quickly learned how to assure his supply by becoming a work junkie. It was at this critical juncture his downward spiral began.

In the ninth or tenth season of Parts Unknown, and not as young as he once was (in his late 50s) Bourdain became obsessed with looking good and fit in front of the camera. To that end he lost weight, and began to work out every day, so that when a scene called for it, he was all too ready to remove his shirt and show us that middle age going on old was no barrier to projecting masculinity. That he was away from his wife and young daughter for 260 days a year was a choice that implicated both the physical and psychological pressures domesticity entails. Was Bourdain infatuated with his day job or running away from the truth of himself (ageing star) that staying at home would have obliged him to confront? Perhaps a huge chunk of both.

As he became a media star, the gap between his image and real self grew to unsustainable proportions. And he would discover the hard way that he couldn’t simultaneously be himself and untrue to himself. Hooked on the high of celebrityhood, he chose the latter and ended up sacrificing his personhood on the altar of audience expectation.

What kind of person, who, when invited over by CNN’s Anderson Cooper for a friendly dinner, sets up a camera in the kitchen? What kind of person provides for a small film crew when, shirtless, he’s at the gym working out with weights? How do we account for the shots he was belting back episode after episode in contrast to his teetotaling existence at home? Are we to believe that at the age of 60 Bourdain decided to have his upper body tattooed for aesthetic reasons — and not to appear cool and hip?

Before Bourdain lost his wife and daughter they lost him who was lost to himself.

No one, and that includes The Picture of Dorian Gray, is immune to the ravages of time. In the final season of Parts Unknown, Bourdain was 61 and clearly lacked the necessities to deal with the hard facts of growing old, of having to live up to the demanding masculine role that was expected of him both on and off camera. When on June 8, 2018 the lie he had been living finally swallowed him up whole and spit him out dead, we shouldn’t have been surprised.

If there was a time when he should have taken his life, it was when he was a “damage done” junkie living from one hit to the next, doing himself and no one around him any good. But alas, there was a significant deficiency in purchase, in public attention his passing would have excited. 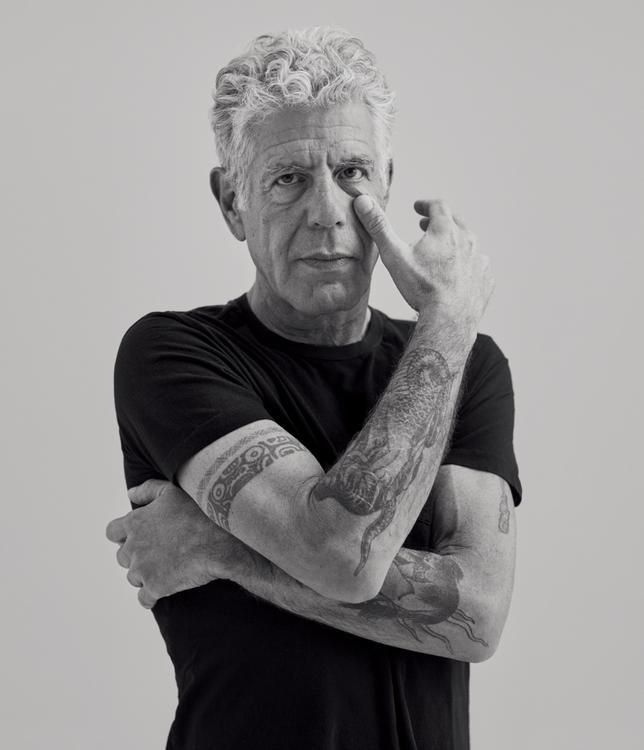 It was only when he became a celebrity, only when the camera would provide the appropriate amplification, would suicide become at first a temptation and then an obsession that took over his life. One can only guess how many times Bourdain had imagined his demise and its after-effects before tightening the rope around his neck. Recreating the public mourning, the adulation and eulogies, the obituaries must have worked on him like a powerful drug that he required more of for the same effect — to the final effect that in the end it didn’t matter if he weren’t around to enjoy it.

By the time Bourdain slipped away he had become a star unhinged in the vacuous glitter of fame and celebrity. The only honest moment he showed the world was in the rendering of his final judgment on the phony he had become — by getting rid of it once and for all.

What really happened in that lonely hotel room in Kayserberg, France is that Anthony Bourdain strangled his persona in order to be free.

His suicide is a tragic reminder that when fame and celebrity conspire to estrange someone from his or her essential self, in certain instances nothing less than radical intervention is called for, and whether or not the afflicted one survives the ordeal is almost beside the point.

The critical distinction between psychology and philosophy is that the former encourages you to like yourself as you are, while the latter asks you to make yourself into someone you like. Given the proliferation of psychology and the virtual disappearance of philosophy from daily life during the past century, Bourdain, in a very real sense, didn’t have much of a chance. Everyone around him wanted him to stay ‘as is.’ Surrounded by sycophants and devotees, there was no one to help him address his radical self-estrangement, much less set him on the path to recover his essential self.

What kind of advice could he expect from his colleagues at CNN? Both Anderson Cooper and Don Lemon worshipped him, they wanted to be like him. And like the legions of his admirers, their hands, too, are on the rope that took him away from us. Where there should have been a helping hand (a real friend) there was only the unrelenting din of love and adoration and applause that became deafening.

Since Bourdain’s after life has been as much of a lie as was his actual life, the real person remains an enigma, and what was authentic in the man and his life is still waiting to be exhumed. The blinded-by-the-light media tried to explain away the suicide to a defective sequence of genes, conveniently exculpating itself and the star of the show.

If “the condition of truth is to allow suffering to speak,” (Adorno) maybe one day, on his behalf, the people who knew Tony well will speak the truth to the aura that obscures him, to the worship and veneration that have disfigured him beyond recognition. Then again, if art is said to happen when the image is superior to the thing itself, we should be thankful that Anthony Bourdain sacrificed his personhood, gave his life for his groundbreaking Parts Unknown. We got what we wanted: entertainment and edification. CNN scored big time on the ratings. And Tony got what he wanted: fame, adulation and a robust afterlife.

The only thing we really know about Tony Bourdain is that he was not the television personality we came to know. Which isn’t to say he is not the good friend who is missed who is no longer around.